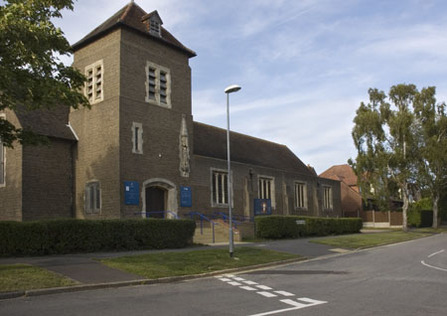 Until the 1920's, Farlington was a scattered rural parish which included within its boundaries the two villages of Farlington and Drayton. The ancient parish church of St. Andrew, rebuilt in 1875, was large enough to serve the needs of the population. In 1925 the 122 year long incumbency of the Richards family ended and the Rev. Leatherdale became Rector. He belonged to a different generation and could see that the Parish was about to change dramatically. Within a space of ten years nearly all the available land within the city boundary would be built into suburban sprawl. In 1927 the new Diocese of Portsmouth was created. It was proposed that the boundaries should be redrawn to relate better to the new areas of development.
In 1929 the Parish gave up the area to the north of Portsdown Hill but gained the area between Court Lane and East Cosham Road, and Lower and Upper Drayton Lane. A New Rectory was built on farm land in the centre of the Parish and it was agreed that a new church to the west of the Parish was a priority.

Of the three possible sites the current one was chosen partly because the Rector thought it would be away from the sounds of the traffic, but we note that the land was cheaper at 5 shillings per square yard than the land on Havant Road at 8 shillings. The land was bought from Mr. Gammans, iron founder and developer for the sum of £1,125. At a meeting of the PCC in September 1928 the Archdeacon of Portsmouth said that the Diocese would pay for the land and shell of the church, expected to cost £10,000, and the parish had to complete and furnish it. Fundraising was difficult as this was the height of the depression and eighteen months after the Archdeacon's visit the new church fund stood at just £285.

The situation was saved by individuals. Lady Heath Harrison of Liss, wife of the shipowner, donated £1000 for the organ which was installed by Ivemy's of Southampton, and £200 towards furniture. The Patron, Miss Richards donated a Broadwood grand piano and the Richards family gave some fine communion plate. Dr Gange, the local G.P. donated a Jacobean bible box. The parish sidesmen raised the money for the chairs. Mr. and Mrs. Hoskins donated £50 for the pulpit, and Mrs. Bevis £25 for the font. The Mothers Union donated the cross and candlesticks for the Lady Chapel altar and The Sunday School paid for the Processional Cross.

Initially it was planned that the church would hold 750 people, later reduced to 500. There was to be a peal of bells in a tower with a spire on top but instead of that the diocese provided one large bell. The story goes that the Rector was inspired in a dream, to put an inscription on the bell which reads: "Good Christian folk this news I tell, that Christ is risen o'er death and hell."

The architect was Mr. Randoll Blacking of Paget and Seeley, the builders were S. Salter and Co. The foundation stone was laid on Easter Tuesday April 22nd 1930, by Lady Heath Harrison, in the presence of the Bishop of Portsmouth. The inscription reads: "To the greater glory of God, The Diocese of Portsmouth built me. A.D. 1930". The church was dedicated to the Resurrection as Lady Heath Harrison was keen to associate the dedication to the nearest festival and the Bishop hoped the church would witness to passers-by as a bidding to all, to be uprising. The congregation was to strive to rise higher and higher in its values and modes of life. The consecration took place on Saturday October 11th followed by a public lunch in The Drayton Institute. An eyewitness said that the Bishop knocked so hard on the church door that he dented it in his enthusiasm! It was the first church consecration to take place in the new Diocese.

This has been condensed from "The Church of the Resurrection, a brief History of its building", written for the sixtieth anniversary of the church in 1990.

Want to know where it is? You can find it's location by looking at the map provided.