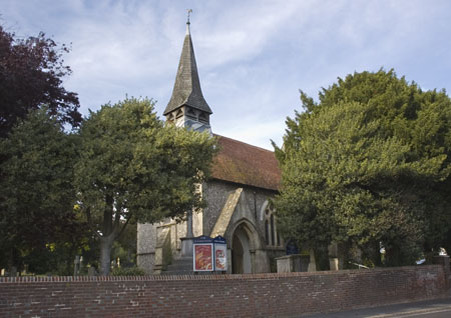 There has been a church in Farlington dedicated to St Andrew since the twelfth century. The exact date is yet to be established, and the dedication itself was eventually forgotten. For most of its life, the parish was totally rural, with Farlington itself consisting of little more than the church, the big house, and a farm. The parish boundaries formed a narrow oblong running north-south, stretching as far north as the modern day Waterlooville, with the church in the south-east corner. Changes to the boundaries in the nineteenth and twentieth centuries have resulted in the parish now being more or less an oblong running east-west, bounded by the Portsmouth city boundary in the east, the road along the top of the hill in the north, the railway line in the south, and Cosham High Street in the west. This pattern is broken somewhat in the north-west corner, where the parish of Christ Church has some territory. The church still stands in the south-east corner of its parish.

There is a list of rectors from 1287 to date on the north wall of the church. Most of these are names only. Recorded history really starts only in the middle of the nineteenth century when there were tensions between the rector, whose churchmanship was on the high side of average, and the squire who was of the extreme low-church persuasion. By this time, the medieval church was in a poor physical state, but the conflict between the two of them delayed the necessary rebuilding until the 1870s. The rector met the cost of rebuilding the chancel in 1872 , and the nave was eventually rebuilt three years later. The west window of the old church was re-set into the new one, and a few of its memorials are still to be seen in the west end and in the sanctuary. It was at the time of the rebuilding that the dedication of the church to St Andrew was rediscovered.

A run of magazines from that period survive in the Portsmouth City Records Office, and they provide a valuable insight into parish life at the time, coal clubs, cricket matches, church music (until 1875 the music was provided by a barrel organ) and the like.

Housing development east of Drayton Lane had begun by the start of the twentieth century. The story of the daughter Church of the Resurrection, established to provide a more convenient place of worship to the increasing population in the area, is set out below.


Want to know where it is? You can find it's location by looking at the map provided.